How Focusmate helps people be their best selves, building on Daily’s prebuilt UI

When Focusmate switched to the Daily API, they saw error rates drop 89%, freeing up their team to iterate on product, release new features, and build community.

Productivity has become an integrated and cherished goal of our personal and professional lives over the past couple of decades. And if technology has made one tacit promise over the years, it’s that it will make us more productive.

Perhaps this is part of the reason Focusmate isn’t a traditional productivity tool. “We didn't want to be a tech company, exactly,” Taylor Jacobson, CEO and founder of Focusmate explains.

”Focusmate helps you do things that you wouldn't otherwise do. That's a hard human behavior problem to crack. That's what we want to be experts at.”

Focusmate doesn’t block distractions, or show you any checkboxes or tasks, and there’s barely anywhere to take notes. At first glance, what Focusmate appears to offer its users is companionship: the app is built around 50-minute video-calls, which can be booked every 15 minutes on its calendar-like interface.

After you book a session, Focusmate partners you with another member of the community, who might be a member of your organization, or another group, such as an alumni group.

At the beginning of each work session, the two callers explain to each other in 30 seconds or less what they plan to accomplish during that time. They work silently on their own individual projects, and after 50 minutes a timer goes off — a relaxing chime sound. The partners give each other a 30-second explanation of how the session went; and then they say goodbye. 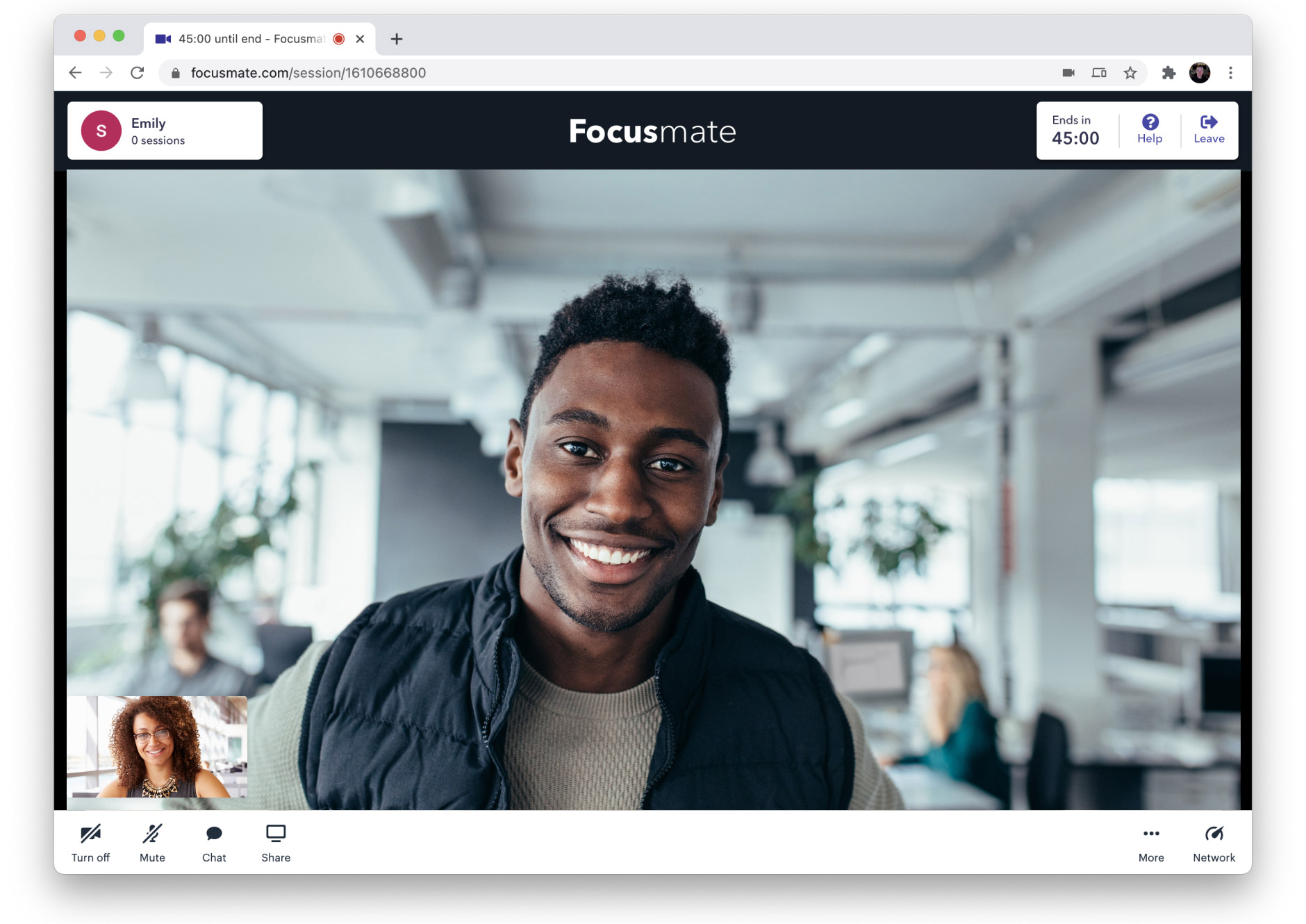 Depending on your settings, your partner might be a colleague, friend, or like-minded community member.

What Focusmate actually provides its users is deceptively simple. Stating the goal of each session ahead of time and staying connected to another person during that time gives users a defined sense of purpose, as well as a sense of accountability. People using Focusmate also know they are offering their partner that same silent support. Companionship is part of the experience, but it’s companionship with a purpose: Focusmate holds its users to task and gives them a sense that, for 50 minutes at least, they’re working towards their goals.

Jacobson holds a key conviction close — one which has guided the development of the company. In his own words: “I think this is true for all of us: we have this innate desire to find meaning in our lives, and to contribute to other human beings.”

Developing the idea for Focusmate

Like so many early-stage startups, the Focusmate origin story reflects the learned experience of its founder. Back in 2010, Jacobson started working remotely. Despite being engaged with the company’s mission, he found remote work lonely and isolating.

“I just couldn't get stuff done. It just didn't work for me to be at home alone without anyone there,” Jacobson explains.

He spent the next year working on his own project, a non-profit organization — yet he still felt despondent. 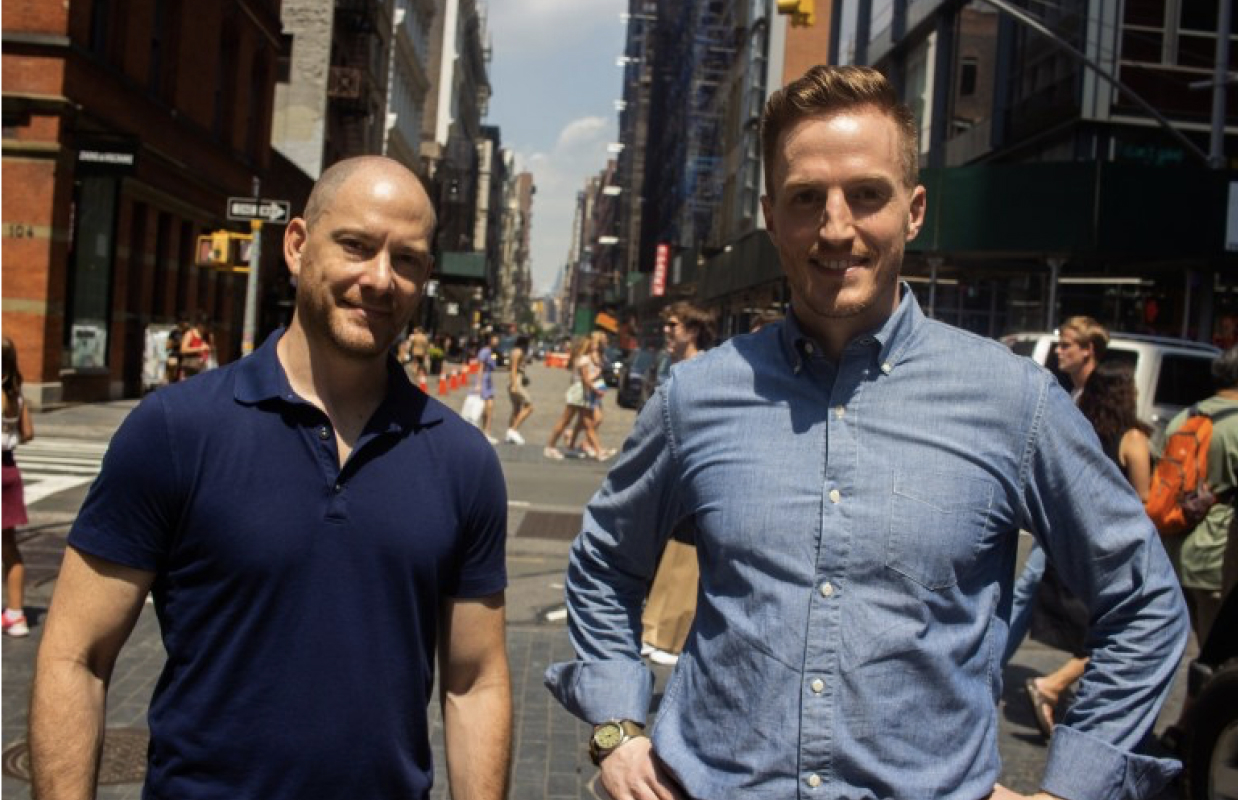 “I spent years and years trying every productivity hack you could think of, and honestly not really having success with any of them,” Jacobson explains.

The experience was so profound that it drove him to study productivity and train to be an executive coach, which he began doing professionally after moving to New York. An avid student of human behavior, Jacobson knew, more than anything else, that he wanted to help people achieve their goals.

The solution that ultimately worked for him was a matter of serendipity and developed out of a “magic moment of vulnerability with a friend.”

“I was talking to a friend who was also working from home, and also an entrepreneur. He was procrastinating really severely on a pitch deck,” Jacobson explains.

Meanwhile, Jacobson was procrastinating on his own project. Jacobson suggested they get on Skype for a remote work session. Before they started, they addressed what they wanted to achieve in very specific terms. “Being very specific about action items is known to increase productivity,” Jacobson explains.

The idea was that they would share their goals, write them down in the chat for accountability, then stay on video with each other while they worked. Afterwards, they would update each other on their progress.

“We tried this structure, and it just worked,” Jacobson says. He had the strong sense that this process could also work for others.

“There are definitely millions of people out there who are similar enough to me and my friend, that if we just offered this exact thing, that would be life changing for people.”

Beginning to build the product on Daily

While video is intrinsic to the Focusmate user experience, how they’ve built it has evolved with their product journey. The earliest iteration was external video, coordinated through a Facebook group. “You would DM your Skype name to somebody else,” Jacobson explains.

The team then found a free open-source framework and integrated video into their site themselves, but they soon faced challenges.

“We would have had to ditch our product vision and just focus completely on video, just to manage that very basic aspect of our product,” says Jacobson, explaining the difficulty. 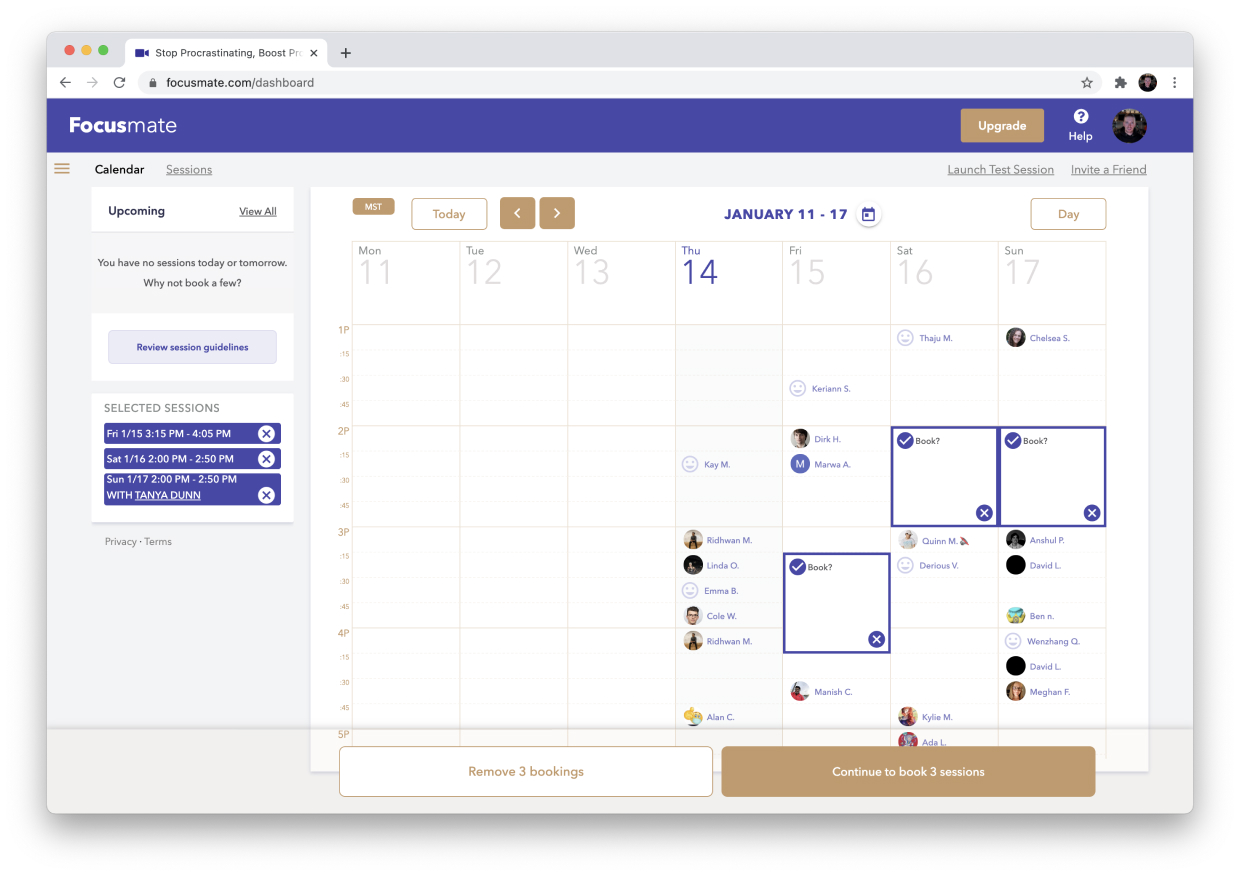 Focusmate's UI is familiar and functional, for maximum usability.

The team needed a product that was reliable, which they didn’t have to spend a ton of time managing. As Jacobson puts it:  “Our priority was, how do we make [Focusmate] fun and engaging and rewarding and joyful? Not how do we ensure that you have a great internet connection with a person who’s maybe on the other side of the world? That's really a tech problem, as I see it.”

Switching to the Daily API had several benefits. It reduced their video call issues by 89% — a huge boost for their users. Best of all, they were able to get started on the Daily platform immediately, with Daily’s prebuilt UI widget.

“It only took us a few minutes to embed a test call in our application,” Mike Galanos, Focusmate CTO says.

“The documentation was super clear and thorough. It's one of the main reasons we decided to partner with Daily.”

When errors do occur, or when questions come up, the Focusmate team knows they’ll get resolved quickly. As Evan Hammer, Head of Product at Focusmate, explains, “Every question we ask gets a quick and thorough response. Plus the whole team is a lot of fun to talk to!”

As Hammer notes, using Daily has freed up resources, while delivering quality.

“A big win is that we don't need a video team,” he says. “Instead of focusing a huge amount of attention on building and maintaining a video service, we got a top-of-the-line one instantly.”

Growing the product, and the Focusmate community

‍Growing community is an important business goal for Focusmate. Hammer explains that making the shift to Daily has allowed the team to refocus their technical resources on improving the wider customer experience, with growth and engagement in mind.

“Previously we had avoided improving our in-session experience, but switching over to Daily gave us the foundation to focus on this area of our app,” Hammer says. “We redesigned our in-session info so that our users could see each other's names, photos, and how many sessions they've done.” The team also built rematching, so that when someone's partner is late, they can get a new one, boosting user engagement with the platform.

Focusmate also moved forward on a new community feature. While Jacobson was not designing a product to specifically alleviate loneliness, helping communities build a greater sense of connection was important to him. One particular community that’s flourished on the platform is a Facebook group called ADHD For Smart Ass Women. 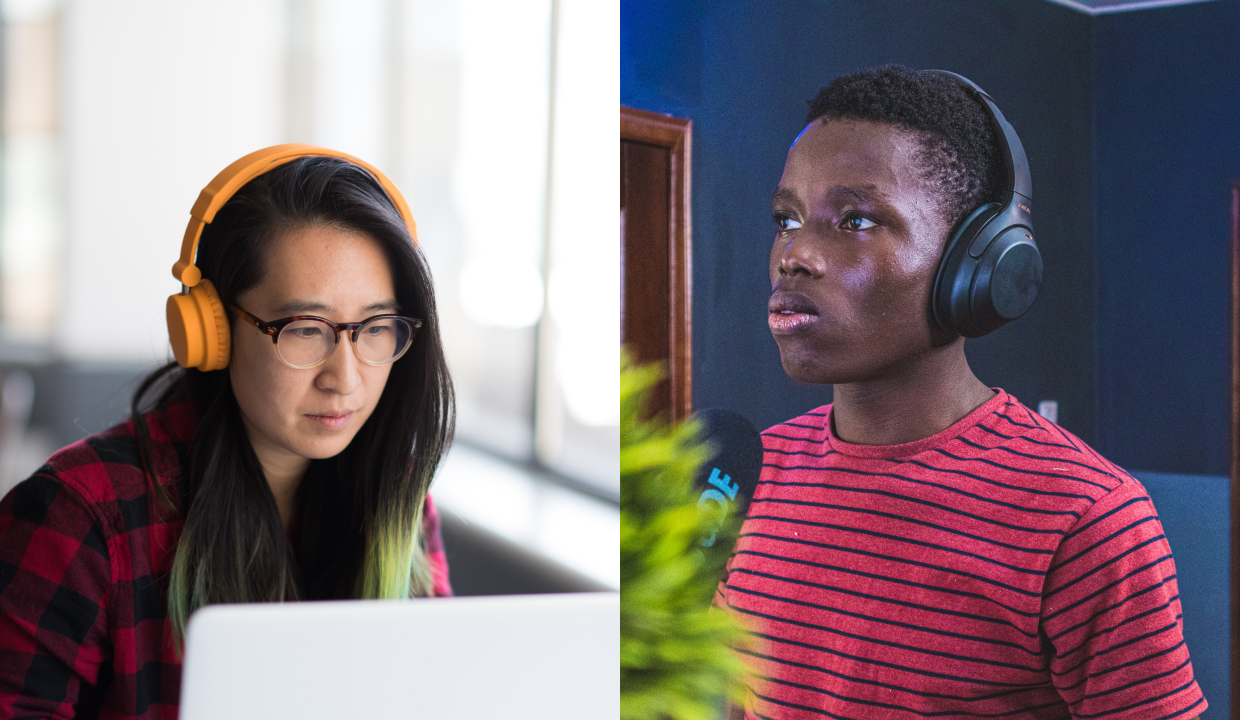 “There are some people on Focusmate that are productivity optimizers, and they're very regimented,” Jacobson explains. “The people in the ADHD for Smart Ass Women group are much more like: hey, I'd love to have a partner who's just, like, I need to make my breakfast and make my bed and brush my teeth, and, you know, maybe meditate or something, 'cause I need to get my day going,” Jacobson explains. “They'd rather work with somebody else who's in that community.”

In the same way that Daily allows Focusmate to concentrate on building their business, other companies can use Focusmate to focus energy on their own goals, like building bonds between remote coworkers. As Jacobson puts it, “It’s just a way to build more connective tissue within your company without having to have a Zoom happy hour or something.”

Jacobson personally uses Focusmate for things like meditating, yoga, and physical therapy — and likes to think that people can use it for whatever is important to them. Focusmate remains there in the background, supporting its users with whatever they want to do.

Similarly, Daily is working in the background for Focusmate — taking care of the video part of their product, delivering the highest call quality for Focusmate users, and continually working to provide the best possible video service.

As Jacobson says, “We know what your product is, and what you're developing is exactly what we need. We have faith based on this experience that your team is going to really care about us and commit to continuously developing this great platform.”

”We chose Daily because in our evaluation process the team was the most responsive and engaged with us.”