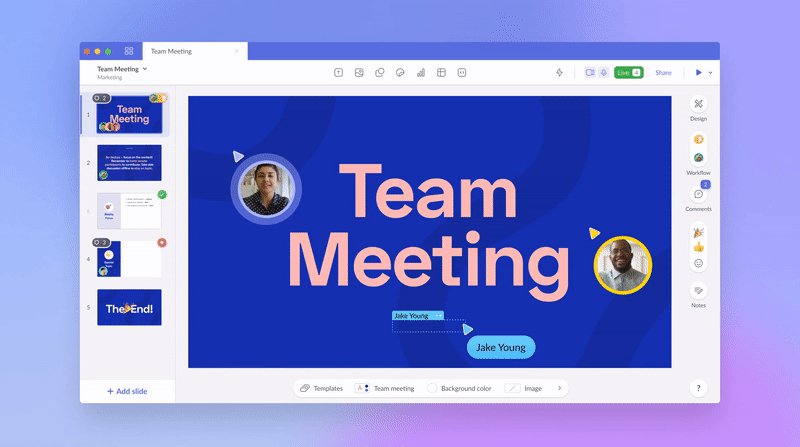 “Daily provided a better product aimed at web applications like Pitch at a better price point.”

Pitch has rethought the way teams create and share presentations, making the process fast, effortless, and fun. When their CEO wanted to incorporate live video chat into their product four weeks before launching the platform in beta,  Paulus Esterhazy, Principal Engineer at Pitch, was skeptical. Esterhazy knew that webRTC was powerful enough to deliver the call functions he needed, but building the feature in four weeks seemed impossible. “We changed our mind after taking a close look at Daily,” Esterhazy explained.

When Pitch designer and developer Jelle Akkerman began to think about UI design, he knew that video needed to feel completely organic to their product— not the same video calling grid, bolted on. Akkerman was inspired by the live collaboration element that Pitch already planned to build into their product: the cursor view, where collaborators can see each other’s mouse cursors as they work on the same presentation. It made sense to build on this foundation.

Akkerman built the original prototype in Pitch by prototyping in WebRTC and playing with HTML media elements. The Daily platform allowed the Pitch team to build beyond their prototype, iterating quickly. “It would’ve been harder to iterate in a design tool because it’s not live,” Akkerman explained.

Pitch’s live video collaboration feature extended the possibilities for team collaboration within the tool—and ultimately, how teams are able to work together.

With Pitch’s live collaboration feature, a Pitch document becomes a video chat room. A collaborator’s mouse cursor is accompanied by their video stream in a circle. During a live session, a user’s video pulses as they talk, or a mute icon appears over a user’s video when their audio is disabled.

The Pitch team had originally coded a prototype from scratch, including a reactive audio feature that pulsed to show when a collaborator spoke, which was really CPU intensive. The “pulsing” of the video bubbles today is a performant CSS animation which responds to Daily’s built-in audio capture feature.