When Paulus Esterhazy, Principal Engineer at Pitch, heard that the CEO wanted to integrate video calls in their product, he was not sure it was feasible.

“I was initially skeptical.” Esterhazy says.

Pitch is a collaborative presentation platform designed to change the way teams build presentations, making the process fast, effortless, and fun. Founded by the same team behind Wunderlist, Pitch has raised a total of $138M million to recast presentations for the collaboration era.  As CEO Christian Reber has put it, the idea behind Pitch was to build a tool “for non-designers to build beautiful decks," with workflows like integrations and templates that make teams more effective.

When live video collaboration became part of Pitch’s vision, the engineering team were doubtful they could deliver within such an ambitious time frame. They had a week to prototype and a total of four weeks to launch.

But, as Esterhazy explains, “We changed our mind after taking a close look at Daily."

The initial idea for a unique video UI

For decades, presentations have driven business growth and shaped how information is shared. Yet most presentation software hasn't changed fundamentally since it was first introduced.

By contrast, Pitch delivers a product built for how we work and share ideas today. It emphasizes elements like a frictionless user experience, beautiful design, and multiplayer collaboration.

Video calls are a new standard of any workflow — and the Pitch team had experienced the frustration of trying to collaborate and screen share material through a third-party video calling tool.

"It was clunky," reflects designer and developer Jelle Akkerman. Moreover, in the call screen share, the presentation was "very grainy." This experience was misaligned with Pitch's core values.

When Akkerman began thinking about UI, he knew he wanted a video experience that felt completely organic to Pitch — not the same video calling grid, bolted on. The product already supported embedded recorded video in presentations, as blocks, but Akkerman approached real-time collaboration as its own workflow.

Akkerman was inspired by the live collaboration element that Pitch already planned to build into their product: the cursor view, where collaborators can see each other’s mouse cursors as they work on the same presentation. It made sense to build on this foundation.

In Akkerman’s design, a Pitch document becomes a video chat room, where a collaborator’s mouse cursor is accompanied by their video stream in a circle. During a live session, A user’s video pulses as they talk, or a mute icon appears over a user’s video when their audio is disabled.

“Pitch is about sharing ideas, and ideas spread better when you’re together.”

CEO Christian Reber immediately recognized the value of real-time video: it would bring Pitch closer to their goal of building highly collaborative software. Esterhazy and the engineering team began working from Akkerman’s original design, moving quickly to explore the possibility of launching the feature in just a month.

An engineer with over ten years’ experience, Esterhazy knew that WebRTC was powerful enough to deliver the call functions he needed to embed a video calling feature in Pitch — but he also saw the challenge this presented.

"The complexities became very clear," he says, of building a custom WebRTC solution.

The Pitch use case is based on group calls, which require a cloud infrastructure. Setting up and then scaling SFU infrastructure would be a significant operational undertaking, Esterhazy knew.

He also was concerned with the effort to deliver call quality, and maintain it, across the different browser WebRTC implementations. Finally, Esterhazy and the team knew from personal experience the challenges of moving from demo to polished product.

Esterhazy began a review of developer platforms. He found that many video call API platforms were skewed towards 1:1 use cases, or made it difficult (or impossible) to move smoothly from peer-to-peer to SFU. Daily, on the other hand, switches seamlessly between SFU and p2p connections between calls. In general, its STUN/TURN media server extensively relieved Pitch of infrastructure overhead. Broadly, the Daily platform provided key abstractions over platform differences.

Ultimately, Esterhazy evaluated Daily and five competitors before making the decision to go with Daily.

“Daily provided a better product aimed at web applications like Pitch at a better price point.”

To evaluate whether or not it would be feasible to bring a video call feature to market in such a short space of time, Esterhazy’s team built a second prototype in Daily based on Akkerman’s original design. Esterhazy emphasizes the ease with which they were able to get up and running with Daily. "We used the React tutorial," Esterhazy explains. "It took a few hours." Steps like creating rooms with the API were intuitive. "Other APIs got in the way, but Daily works as you'd expect."

Three weeks: from prototype to product

Just a week after Reber first tasked the team with exploring a video feature, the Pitch team met to discuss whether they would implement it. Fittingly, they held the meeting in the Daily prototype. (“It was really meta!” Akkerman says.)

Although the prototype had been a success, they still only had the rest of the month to bring the feature to market. Still, the ease with which the engineering team was able to build a prototype convinced them that it was possible.

The Daily platform allowed the Pitch team to build beyond their prototype, to iterate and make changes. “It would’ve been harder to iterate in a design tool because it’s not live,” Akkerman explains.

They were also able to leverage Daily’s functionality in ways which carried over to the UI. The “pulsing” of the video bubbles in Pitch is a CSS animation which responds to Daily’s built-in audio capture feature. For the prototype Akkerman coded from scratch, he had built a web audio feature that was reactive, but it was really CPU intensive.

When it comes to support and working with the docs, Esterhazy describes working with Daily as “one of the best onboarding experiences we’ve had.”

Reflecting back on using Daily, Esterhazy notes the platform was "polished, battle-tested, and developer friendly."

Pitch users start by building presentations, but many ultimately use the platform for more imaginative, spontaneous projects. This is in part by design: "There is a serendipity that's important to working together," says Akkerman.

Ultimately, supported by Daily, Pitch can continue to leverage real-time video in its mission to transform presentations — and how teams work together.

“We could not have built this in three weeks without Daily.” 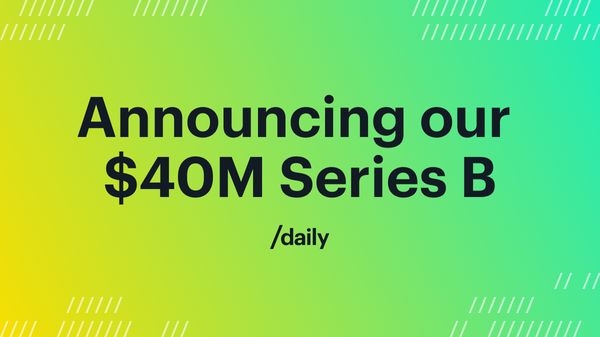 Today we're happy and grateful to announce a new $40 million round of funding, led by Roseanne Wincek at Renegade Partners. You can read the full story on TechCrunch. We 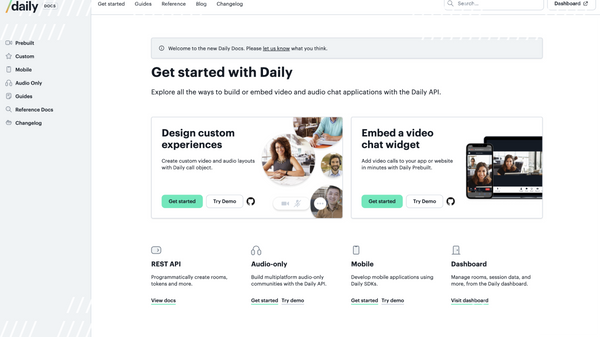 The call is coming from inside the Docs